In 2002, I began discussions with Peter Marques of Tentsmiths on the construction of a standard junior Subaltern's Marquis, made to the dimensions laid out in Lewis Lochée's Essay on Military Castremetation: a seven foot ridge pole, eight foot standards, ten and a half feet wide, fourteen feet long, with four foot high side walls. There was nothing in his catalog which had these exact dimensions, but email and phone discussions worked out the details; we asked that there be no rope ties, and to save on the cost we said we would sew all the grommets by hand ourselves. In short order, the tent arrived - and it was wrong. It had a five foot ridgepole, not seven feet as requested. In an exemplary display of excellent customer relations, Tentsmiths took the tent back, no question, no comment, no hesitation.

We continued our correspondence over the next few months. In order to be more clear about the tent I wanted, I started lookng carefully at original sources. The dimensions from Lochée are echoed in Simes (Officer's Guide &c.) and Smith (Universal Military Dictionary), so I was fairly confident that this is what I wanted. I was also fairly confident that no-one has reproduced it before. I took a careful look at the images in Lochée, and found a puzzle. It is impossible to create the tent he illustrates according to the dimensions he specifies.

I drafted up a Marquis top in half-inch scale, matching Lochée's design of ten panels on the one end, and nine panels on the end with the door. To make things interesting, I also drafted it to have a doorway that was five feet tall. I drew my primary inspiration from the illustration of tent No. 8 in Grose's Military Antiquities. 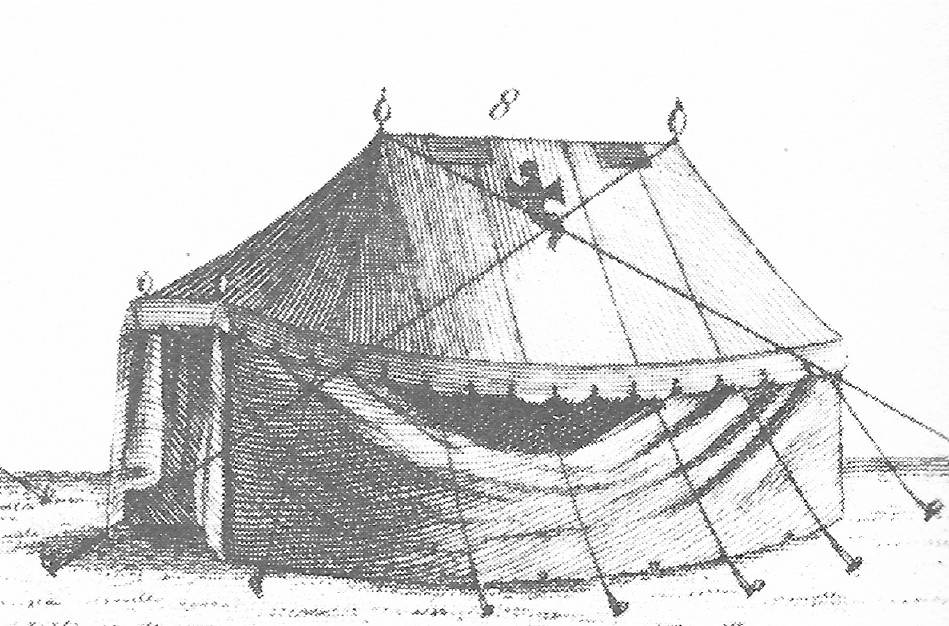 Although the caption claims that it is a Captain's tent, the design with the door in the end rather than the side is common to the period. Indeed, the caption to tent No. 6 (with the door in the center) says: "One of a very modern construction, chiefly calculated for subalterns; the door being placed in the cerntre of the side leaves an area between the beds which are placed at each end." Given that Grose's Military Antiquities was published in 1801, I figured a "very modern construction" was not what I wanted for a junior Subaltern in 1781! I cut out a paper model to see if it would work. Much to my surprise, it did. I sent it, with the measurements, to Tentsmiths. For trim, finishing, and decoration, I specified a scalloped edging, bound in red, no toggles and loops for the side walls, no rope ties, and no grommets for the ropes and tent pin loops. I said we would fasten the side walls with hooks and eyes (which we would attach) and that we would sew all the grommets - execpt for the metal grommets on the ridge line where the pins from the standards go through.

Time passed - then in July of 2003 two boxes arrived. I sent Tentsmith's this email:

I was in New York when the Grose #8 arrived Monday. I did not get to
look at it until yesterday.

It is precisely what I wanted. It is without shortcut or compromise in
its design and construction. I examined it carefully and noted the seam
placement on the walls, the care taken with reinforcements at the
stress points, the evenness of the edge scalloping, the overall
precision of the stitching. I hope you are proud to have made it,
because it raises the bar for re-creation of the subaltern's Marquis.

It was well worth waiting for.

We have a lot of grommets and hooks and eyes to sew before we can field
test it, but I will send many photos.

Thank you for an outstanding effort.

We then went to work, hand sewing 50 grommets and 25 sets of hooks and eyes; making dogbone rope tensioners with a spoke shave, stringing up hemp rope lines, and making slip joint poles styled after the ones from Washington's dining Marquis at Yorktown. The crowning touch was the ridge line decoration, nearly ubiquitous in original 18th C. camp images. I copied the one from the Grose No. 8.

Experiencing the tent is quite practical. The oval ends help maximise the floor space, while the low walls reduce the foot print. We still haven't tried to rig an inner Marquis, or cram two Subaltern's worth of kit in there, but so far we are very pleased with the result.

These photgraphsa are from various editions of the American Colonial Experience program at the Ronald Reagan Presidential Library, where Major Grenier (H.M. 64th) and Captain Hughes (Royal Artillery) have each enjoyed and interpreted the Grose No. 8 as an officer's Marquis. 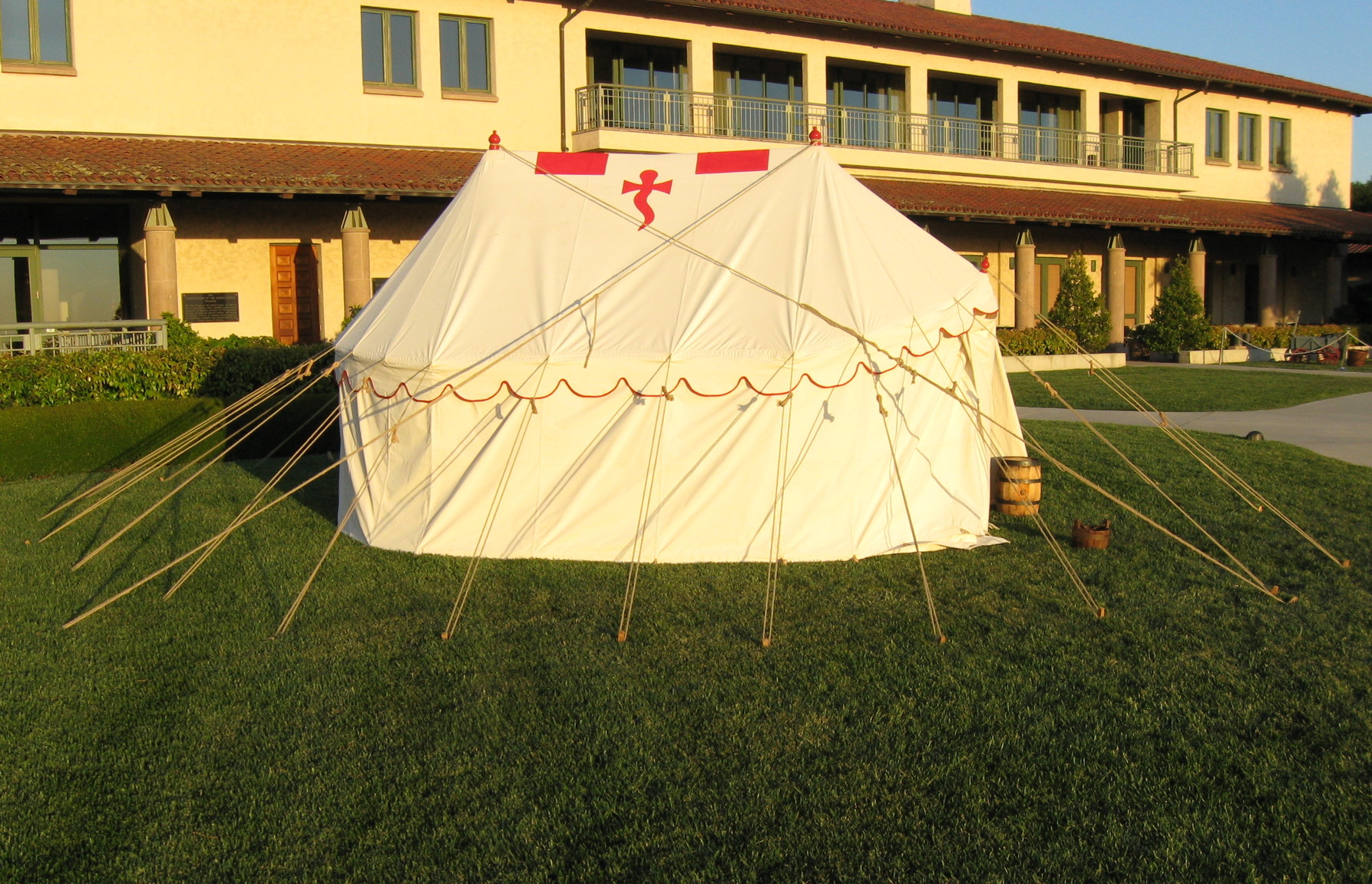 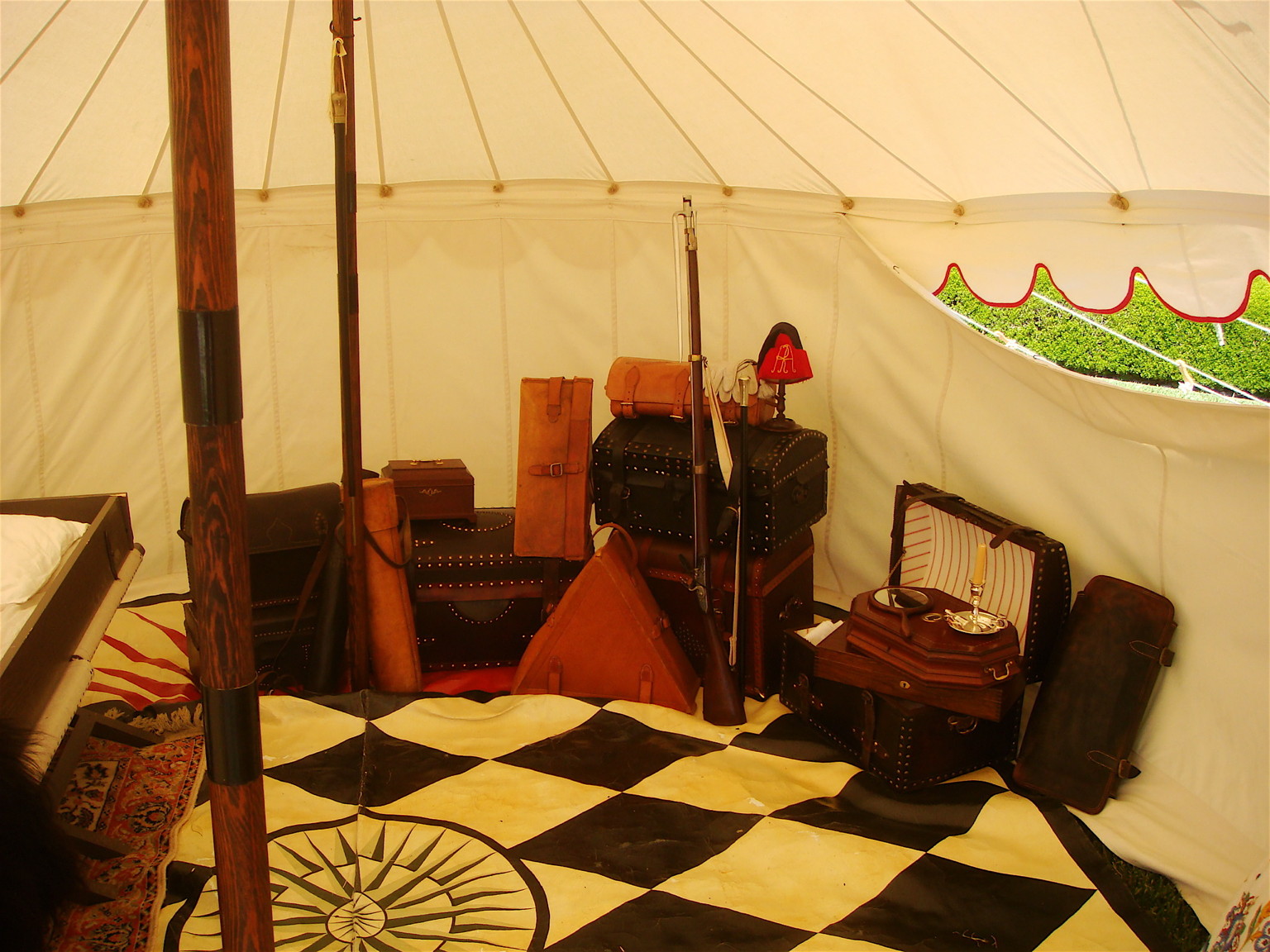 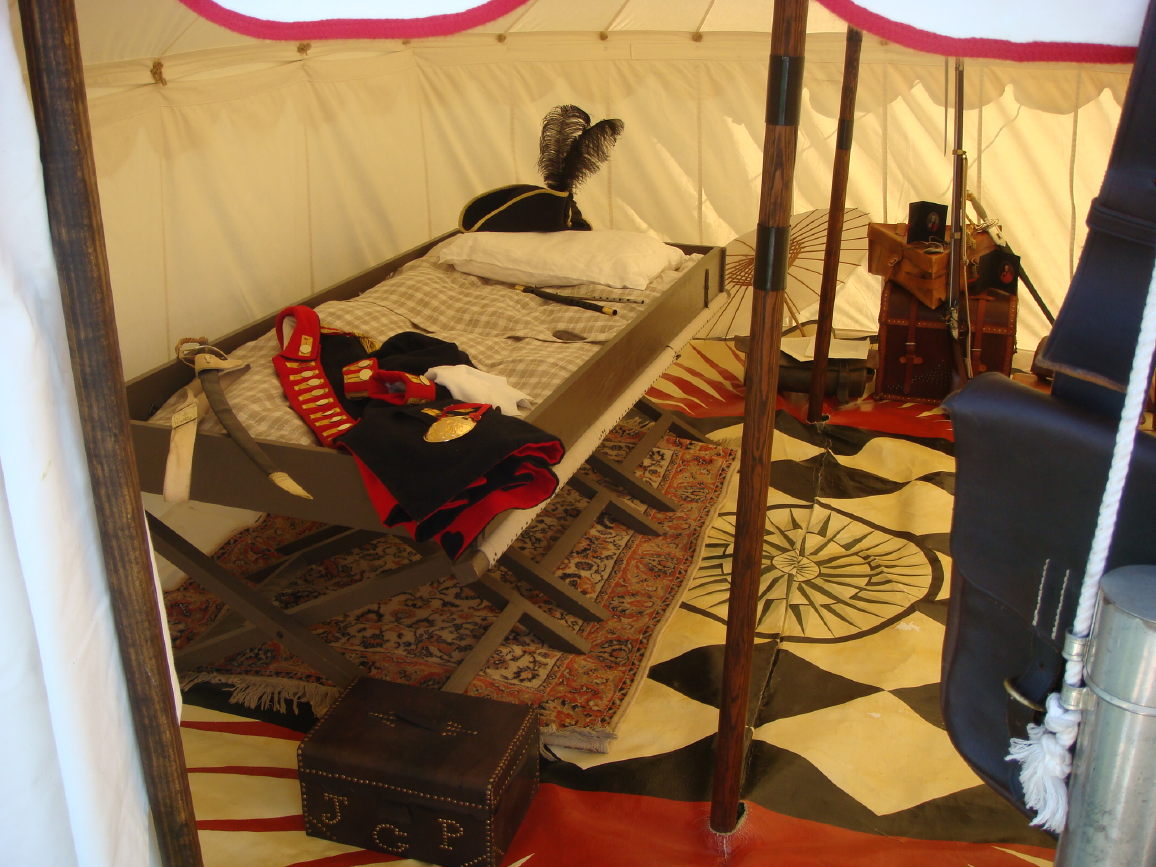 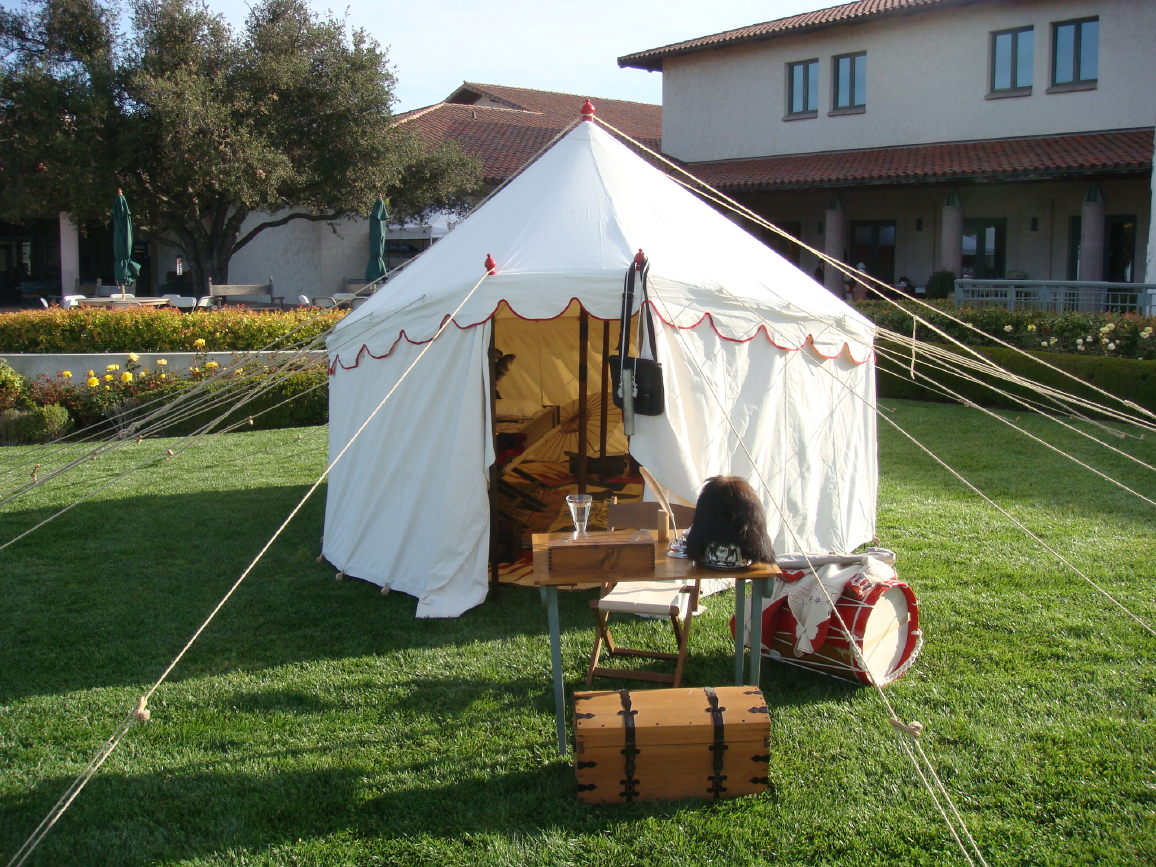 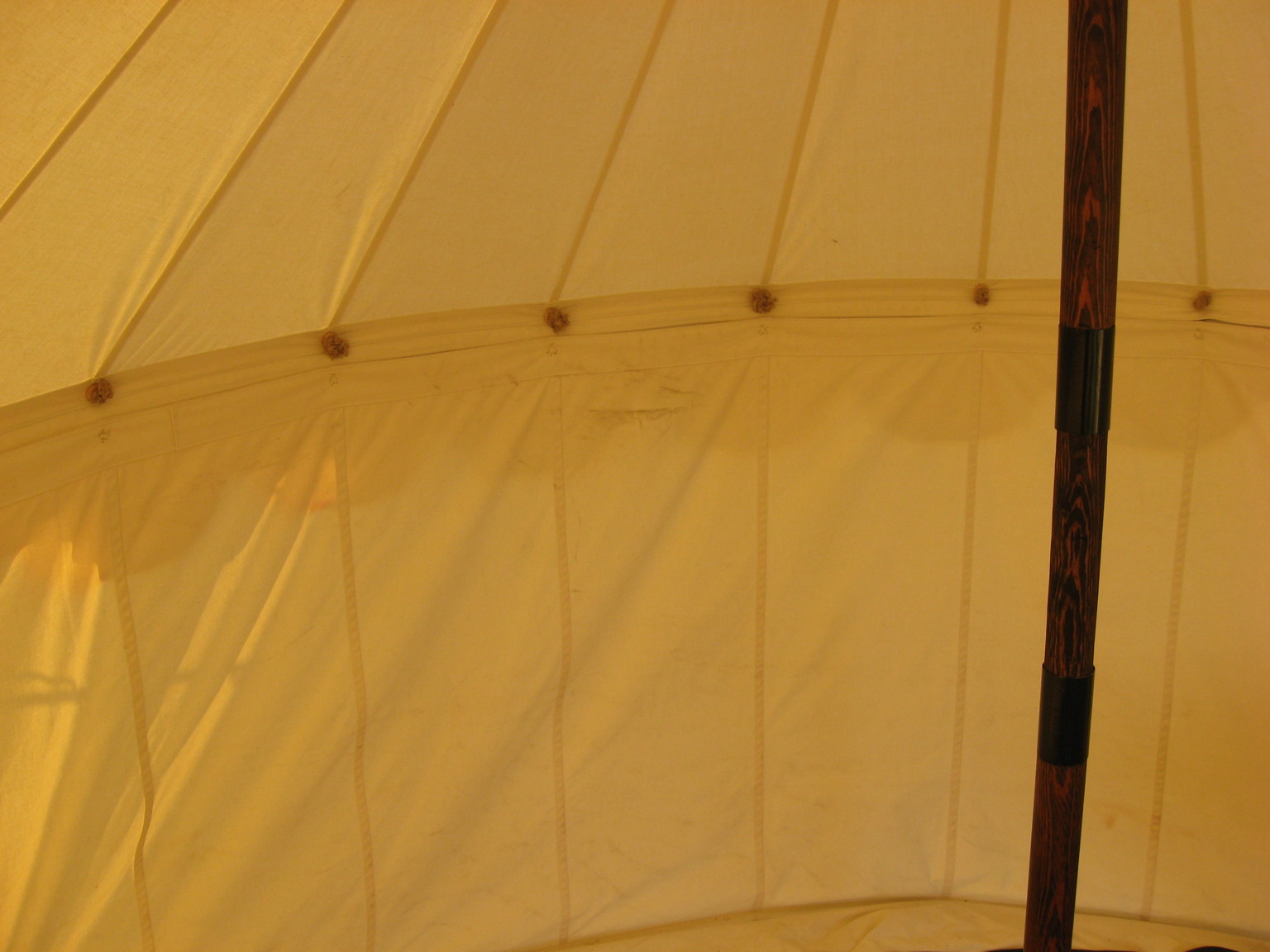 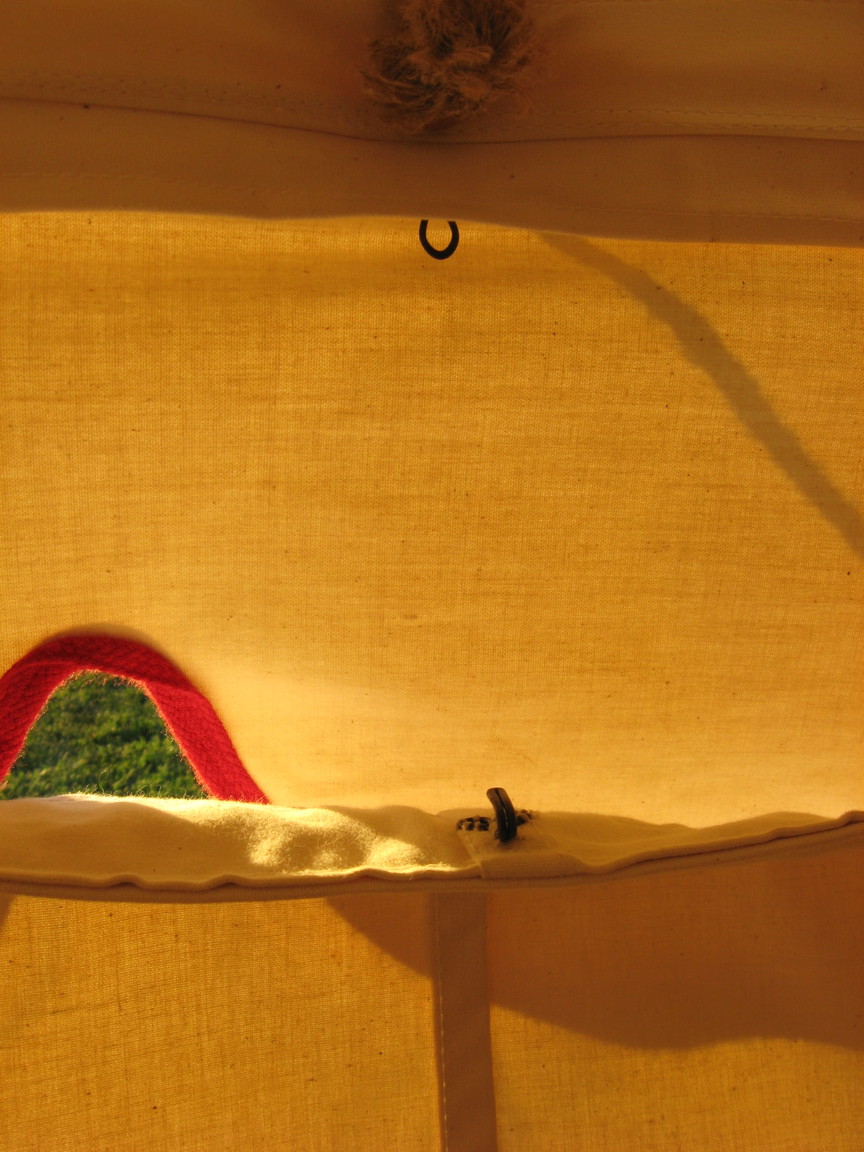 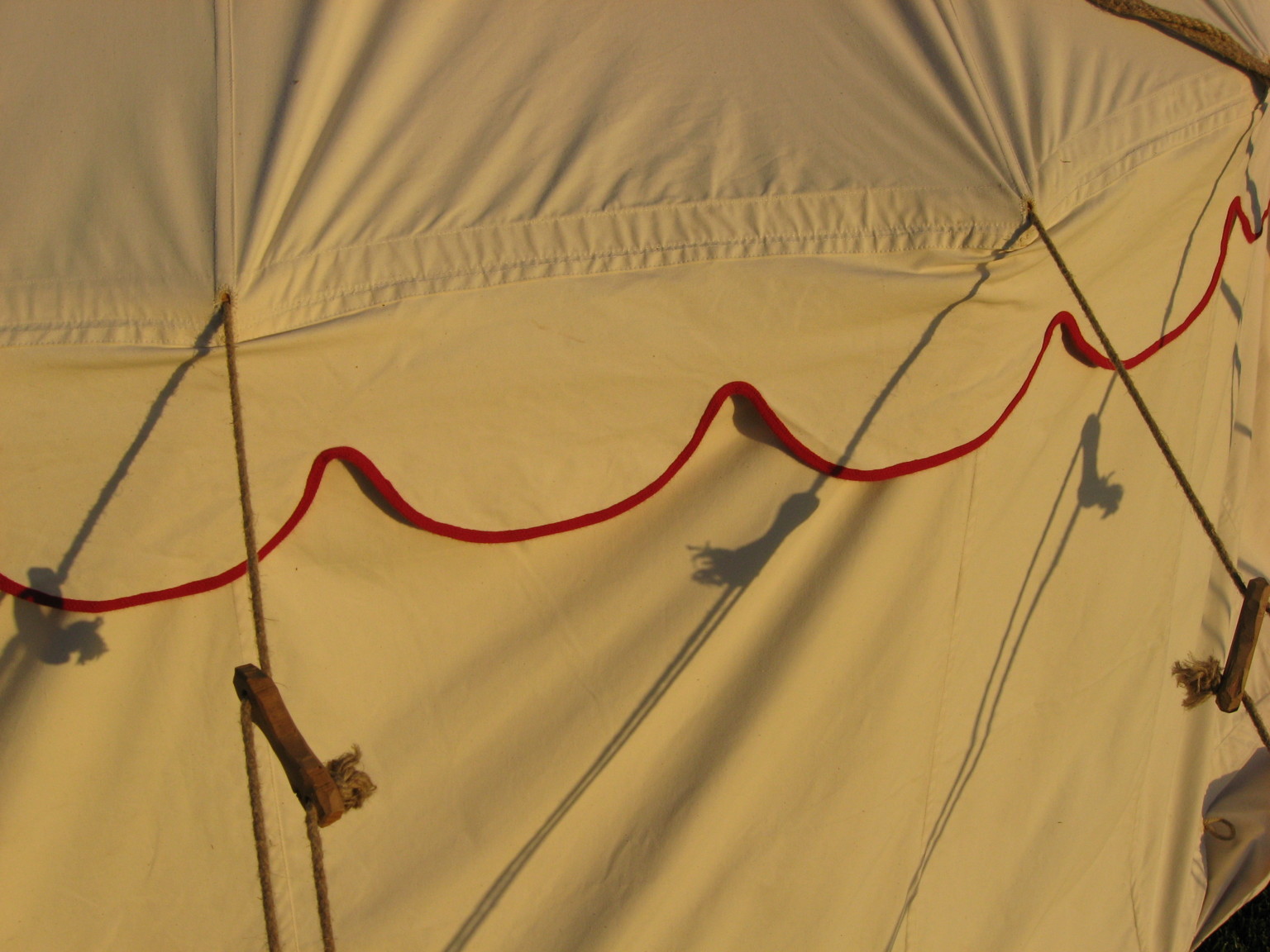